Marvel's Norse God Falls To An Earth Near You!

Last Friday night I found myself at a loose end and in Newcastle and so, after finding an accomplice, went to the cinema and saw the new Marvel Studio's film "Thor". This was a bit of a gamble on my part; I normally like comics far too much to really enjoy the films that are based upon them. Nonetheless, I'd been hearing fairly good things about the new Thor film so thought I'd chance it. 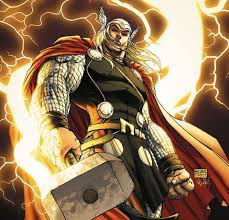 I was pretty interested to see a super hero film directed by Kenneth Branagh, a man famous for his production of Hamlet. Indeed, he conceptualized the film as a Norse/comic-book twist on 'Henry V', stating that both are about a young king who undergoes trials and tribulations: fighting a war, courting a girl from another land, and developing as characters. The Shakespearean comparisons in this production don't end there, however, Tom Hiddlestone described his role,  Loki as "a nastier version, of King Lear's Edmund" and Ray Stevenson said of his role as the warrior Volstagg "he's got every bit of that Falstaffian verve and vigour... Falstaff with muscles!". In fact, Thor's associations with Shakespeare go back much further than Kenneth Branagh, when Stan Lee first invented the character back in the early 60's he wrote the Asgardian dialect with a mixture of Shakespearean and King James Bible English.

The old fashioned dialogue was one of the things which was cut in the transfer from comic book to movie. Personally, I think that this, only one in the myriad of small decisions which have to be made when adapting any concept for entirely different art form, was a good one. In fact I think the majority of the directorial decisions were good. The casting was also good. Anthony Hopkins was of course solid but I particularly enjoyed the dynamic between Thor and his brother Loki, played by the unknown (to me at least) Chris Hemsworth and Tom Hiddlestone. Additionally, while the plot certainly contained some of the usual cliché's of the genre I was pleasantly surprised to find myself unable to predict the entirety of the plot. There were even moments of comedy without ever descending into farce. Indeed, while the film might have started a little slowly and generally been far from perfect, it kept me entertained throughout.
Finally this is one not to be missed by franchise lovers. If you enjoyed Iron Man and Iron Man 2, then Thor indirectly follows on from where they left off and is the prequel to the prequel which will be this summers superhero blockbuster "Captain America: The First Avenger". Just make sure you wait through the end credits for the crucial linking scene.
Posted by Jonathan Kitley at 15:06 No comments:

Saving Me and Private Ryan

On Wednesday morning, while on a three hour train journey from Durham to London, I found myself with enough dead time on my hands to re-watch a film that I consider to be a bit of a classic. "Saving Private Ryan" scooped 5 Academy Awards and 3 Oscars in 1998 and in my opinion is quite as compelling now as it was then. The Omaha beach landing that opens the main story is probably the scene that endures longest in the viewer's mind and likely went a long way to winning Spielberg the Best Director's Award. It brilliantly and luridly paints both the epic scope and the indiscriminate and terrible violence of such an assault, in itself a microcosm of the 6 year conflict. 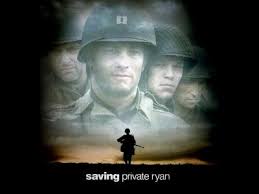 The narrative centres around the search of eight men for one man, the eponymous Ryan, a member of the parachute regiment who's been dropped somewhere over France, and who's earned a trip home due to the death of his three brothers. I'm sceptical that this would actually have happened in the war but stylistically it works extremely well. The film is bookended by two short clips of a now much aged Private Ryan actively remembering the sacrifice which was made on his behalf and which we see played out in the film. The picture concludes with Ryan considering once more the challenge of his life, had he "earned" their sacrifice, had his life proved worthy of their loss. As viewers we're left with the same question, we might not have been saved in a way similar to the fictional Ryan but we too are heirs to the sacrifice of millions in WWII. Are we living lives worthy of what they gave up? Do we value enough the society which they laid their lives down for? How are we living in response to what they did?

Perhaps it's just because this week is Holy week but all this struck me is having echoes of the Easter story. Ryan's challenge to "earn it", to "earn" their sacrifice is not really about "earning" anything at all. They soldiers are already dead, the sacrifice has already been made. His rescue is a done deal, just like Jesus' death for us on the cross it's already a finished work. That's completely aside from the question: what could one man actually do inside his one life to be worthy of the lost lives of six others? Similarly how could a people whose lives are completely unworthy of Christ's sacrifice repay the death of the only man who was entirely undeserving of the brutal death he died? I don't believe that Ryan could, and I don't believe that we can. It seems to me, that rather than really being about "earning" anything, Ryan's subsequent life is more about his response to what has happened to him. He feels keenly the need to live differently because of the high price his life has been bought for. To live a better life than he might otherwise have done and a life of remembrance and gratefulness. This too is the very thing that the Christian desires to do, to live differently and indeed better in response to Christ's death for them. For Ryan it is clear that this burden had weighed on him throughout his life. How great for us then, that Christ's death is not just what prompts us to aspire to a different kind of life but is also the very thing that enables us to begin to live that life.
Posted by Jonathan Kitley at 08:56 No comments:

Jonathan Kitley
I'm passionate about stuff. If I'm passionate about it, I'll probably post about it. Here's a foretaste: I like people, classic literature, speculative fiction, theology, comic books, West Ham United and Jesus. Expect to see all these, and more.